I am of the belief, and may be proven wrong on this, that 99.9% of side businesses will fail. I believe side gigs will always be glorified hobbies until you pull the ripcord and go all in.

In 2013, two colleagues and I founded an online female sex toy business. Why, you ask?

Because we were branding, marketing and digital specialists, had access to products, and the margins were eye-wateringly good.

Lesson one – Start for the right reasons.

We got into it for all the wrong reasons; making a ‘shitload’ of money isn’t the right reason for starting a business.

Money is good, actually money is essential, and profit is proof that people value what you offer. However the biggest problem about getting your motivation from money when starting a business, is that when it fails to, or stops making money, guess what? You stop caring about it.

Lesson two – Proudly be the face, stand for something and lead.

Another place we went awry was a lack of clear vision, direction and long-term plan. It was a classic ‘look at what everyone else is doing and replicate that’, but slightly better presented.

Think of your favourite brands – Apple, Microsoft, Thank You Water, Nike – and you’ll see they all have something in common; they stand for something and they often have someone at the front steering the ship.

We were a group of people with no-one willing to take the reins, because as three males who were already feeling like frauds (accurately!) nobody was willing to stand up, lead and be the face of the organisation.

Lesson three – It’s more profitable to mean something to a small ‘tribe’ rather than nothing to a large group.

Now when you mention positioning and vibrators, you’re forgiven if your mind doesn’t go straight to brand positioning, but bear with me.

One place we definitely missed the mark was trying to be all things for all people. It’s a common trap founders fall into. “Our market is adult females (or males) who would like to buy an adult toy off the internet.” Why would we want to rule anyone out?! But the best startups do. They leave potential profit on the table by clearly positioning their brand on who they’re for, and as importantly who they’re not for.

How is a plant meant to grow if you only water it once every few weeks? Watering and nurturing your idea properly is essential to business growth. 2-3 hours a day is minimum.

Now fans of Tim Ferris’ 4-hour work week will argue with me here but Tim Ferris is one in seven billion, not the average, so unless you’re already an expert in building a successful venture and now you’re just replicating a proven model, proper sweat in the business is crucial to any progress.

For us, this was definitely possible, however it meant sacrificing gym, seeing friends, sitting on the couch, basically doing anything but investing time learning about our customers and bettering our offering.

Lesson five – You’ve gotta risk it, for the biscuit.

There’s a number of other reasons why our venture failed, but essentially, it failed because we allowed it to fail. Because it could fail and we would be fine. Egos bruised, a few awkward conversations, but really, we could carry on with our lives, our careers and there would be no long-term damage. The cost of failure was insignificant. And that’s why most side gigs fail. Because the cost of failure is less than the cost of effort. There’s less riding on it (whoops, sorry!).

Written for business founders trying to better articulate their vision and maximise their brand’s potential. Have new articles delivered straight to your inbox. One email a month. No junk. Just insights. 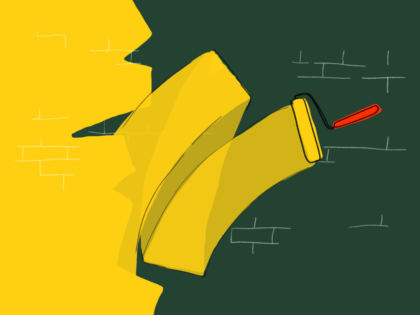 When should a business owner know it’s time for a brand refresh?

Common signs that something needs to change.